This video shows a short trailer for Joanna's first exciting novel, The Unravelling!

Jade Thyme celebrates successfully defending Jules Cranbury on a murder charge. Her celebration is short-lived when she finds Jules murdered. Jade investigates and uncovers a secret justice society whose members hide behind white tabs and black robes while delivering their own vigilante justice.

Jade locates a once prominent and respected lawyer, now known as Noxzema Man, homeless and panhandling in Fan Tan Alley. He warns Jade. Judges, lawyers and police make up the Society. Trust no one.

The MotoCityDolls, her sister's all-female motorcycle gang, save Jade from a Society assassin. Forced to take a leave of absence, Jade packs up her office, but not before coming face-to-face with another assassin - Jules's murderer. 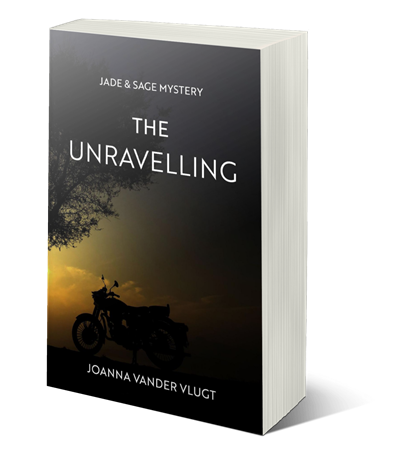