Winning the Lottery by Winona Kent

I was chatting with a work colleague the other day about my imminent retirement. I’ll be 65 in a couple of weeks and I’m looking forward to – finally – being able to stay home and write novels full-time, instead of having to juggle twelve-hour work days with my lifelong creative passion.

I’ve been anticipating this for about two years. I installed a clever countdown app on my phone that displays the months, weeks, days, minutes and seconds to any important event you specify. Initially I was just glancing at it and noting the details – it all seemed very far away. I’ve likened it to walking through a long tunnel and seeing a little patch of daylight at the end, but it was hazy and not really very clear.

At some point, the little patch of daylight suddenly became very clear indeed, and most recently, I’ve begun to smell and taste and feel what it will be like to step out through the tunnel mouth and enter a landscape which will be radically different to where I’ve been for the past 45 years. The prospect is breathtaking.

I’ve always had to work for a living. I married a guy who was a radio news reporter. I knew what I was getting into in 1976 when we met. Neither one of us comes from a wealthy background. The broadcasting business is insecure at the best of times. Frequent job losses mean you move around a lot – and we did. Jim’s first job was in Peace River, Alberta, where he grew up – and from there he went to Regina – where we met – and then we moved to Winnipeg (two or three radio stations and three different apartments in four years), and then back to Regina (one radio station and one apartment), and then Moose Jaw (another radio station and another apartment – I drove to work in Regina, 45 miles to the east, every day), and then, finally, in 1982, Vancouver (nearly every radio station in the city and another four apartments).

In 1982 I took two years off to get my MFA in Creative Writing from UBC, but I had to go back to work full-time in 1984 because my savings were running out. I ended up with a huge telecommunications company whose main attraction was that their head office was a five-minute walk down the road from where I lived. I could even go home for lunch.

But my MFA was good for me. I wrote a book which became a finalist in the last-ever Seal Books First Novel Awards. It was a tongue-in-cheek spy story called Skywatcher, and it got me an agent and a very lucrative deal with one of the top five publishers in Canada. I was, I thought, finally “on my way”. 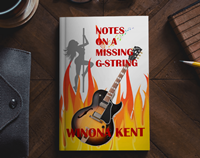